Last week, Verizon published their annual Data Breach Investigations Report (DBIR), analyzing 29,207 security incidents and 5,258 data breaches from 2020. The DBIR, as always, does an excellent job at providing insight at both the skyscraper and blade-of-grass level. Findings from the 2021 DBIR hammer home the presence of email as either the attack vector of choice for cybercriminals or as fertile ground for human error.

A Preponderance of Phishing

Verizon defines ‘actions’ as tactics used to affect an action during security incidents or breaches. While analyzing actions across 4,073 breaches, phishing was found to be the most common action, involved in 36% of breaches (increasing from 25% last year). This sobering stat comes on the heels of the FBI reporting that complaints on phishing and related attacks grew by 110% in 2020.

“This increase (in phishing) correlates with our expectations given the initial rush in phishing and COVID-19-related phishing lures as the worldwide stay-at-home orders went into effect.”

This aligns with trends observed by the Armorblox threat research team. Not only have phishing attacks increased in general, but attackers also used COVID-related themes to induce fear and urgency among victims and affect socially engineered success. 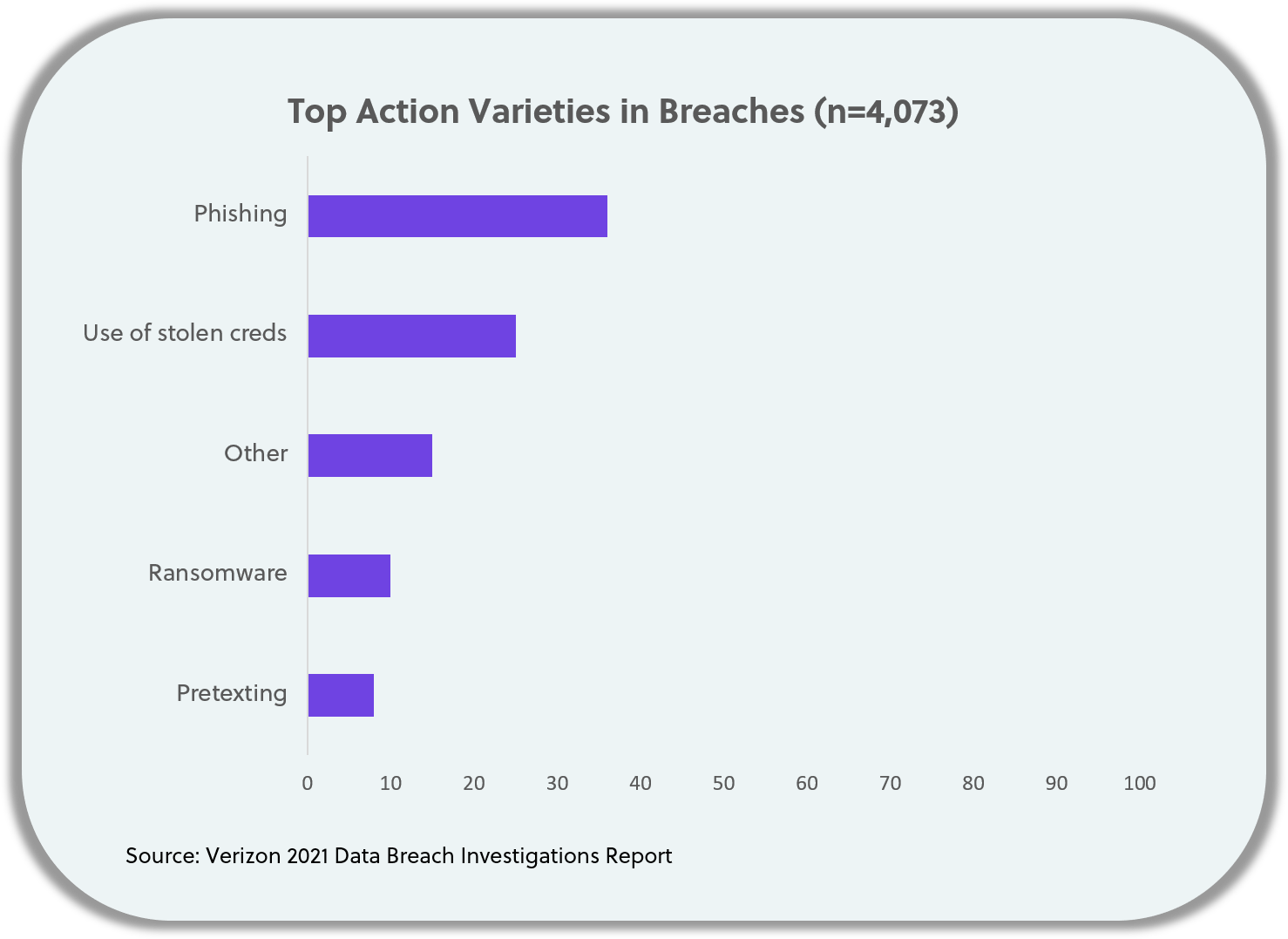 Fig: Phishing is the number one threat action, involved in 36% of breaches

The other actions in the graph above are also noteworthy. Phishing attacks go hand in hand with the use of stolen credentials. More than 60% of all breaches involved credential data. If we focus just on social engineering incidents (n = 3,841), then credentials were compromised in a whopping 85% of cases.

Unfortunately - and unsurprisingly, if you’ve been paying attention to recent news - ransomware made a huge jump to 10% this year, roughly doubling last year’s number. Ransomware actors are growing more malicious and intrepid by the minute, now choosing to target critical infrastructure and “name and shame” their victims into paying ransoms or risk affecting the lives of millions of people.

Business Email Compromise (BEC) was the second most common form of social engineering recorded in the 2021 DBIR. Along with Phishing, the report tracks Pretexting and Misrepresentation as attacker tactics - the 2021 report found the occurrence of Misrepresentation 15 times higher than last year in Social incidents. Of the 58% of BEC attacks that successfully stole money, the median loss was $30,000, with 95% of BECs costing between $250 and $984,855. Earlier this year, the FBI reported $1.86 billion in BEC and EAC related losses in 2020.

Since 2013, BEC has grown and cemented itself as a URL-free variant of email attacks that are often easier to execute and present a higher likelihood of financial reward for scammers. Gabe Bassett, senior information security data scientist for the Verizon Security Research team and co-author of this year's Verizon DBIR, said:

“There's definitely a continued shift for the attackers toward the most efficient attacks and methods of monetization. Breaches are moving away from complexity, toward simplicity." 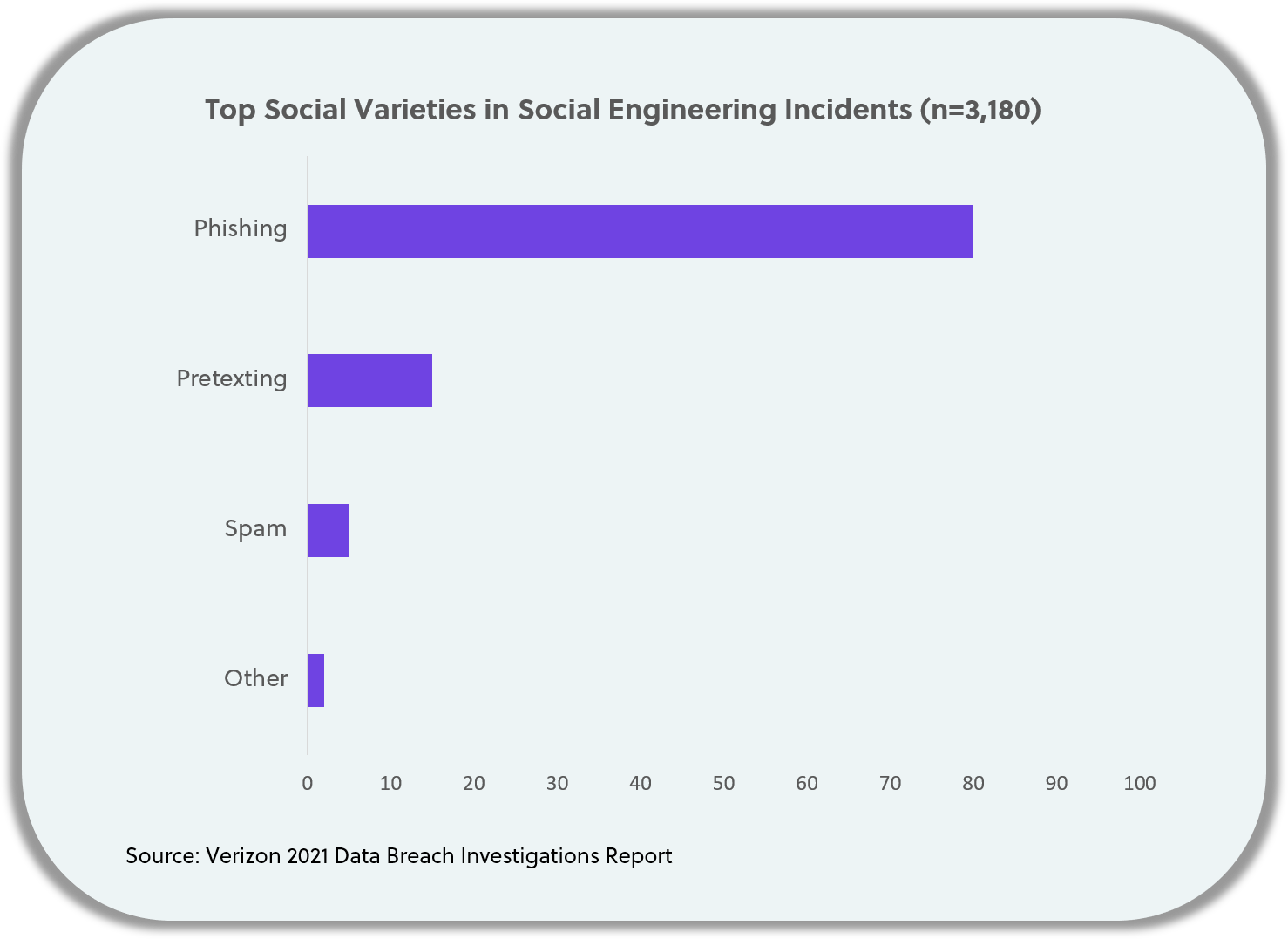 In the graph above, note the small proportion of Spam among overall social engineering techniques used. It’s important to remember two things about spam mail:

With BEC doubling for two years in a row according to the DBIR, it’s evident that the battlefield has shifted from spam (if it was ever there in the first place).

The 2021 DBIR provides illuminating data breach breakdowns for various industries. The numbers point to more than a few industries struggling under the onerous weight of phishing and social engineering:

Won’t Somebody Please Think of the People?

We apologize for burying the lede, but the most revealing finding of the 2021 DBIR was that 85% of breaches (n = 4,492) involve the human element. Whether it was social engineering meant to alter human behavior, misdelivered sensitive information due to human error, or BEC making humans an active (albeit unintentional) participant in the attack - the human layer has emerged as the most attacked and most vulnerable part of the organization. 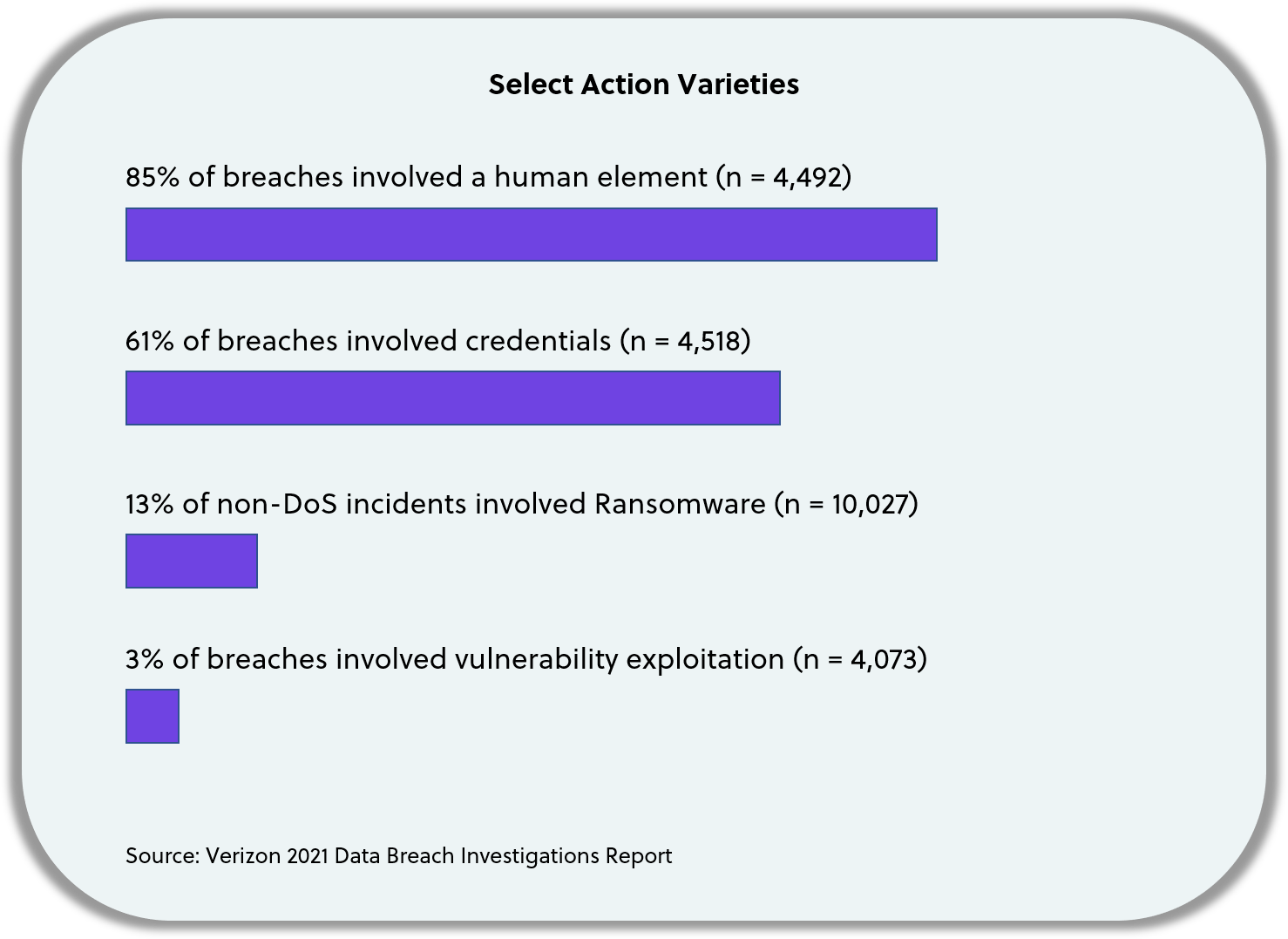 "Transitioning to the cloud changes the security mentality: Traditionally businesses have been focused on securing the computer. When they move to the cloud, that computer is no longer theirs. Moving to the cloud refocuses more clearly on the human element."

The Armorblox threat research team has observed the human layer being targeted by email attacks in manifold ways - by attackers pretending to be trusted entities, using free online services, and replicating commonly occurring email workflows to lull victims into a false sense of security.

A hundred-page humdinger of a report with breach data can’t be distilled into a few points of recommendation, but here are some security hygiene tips from the Armorblox team to get you started:

If you’re reevaluating your email security stack and are interested in augmenting your built-in email security, get started with a free 2-week Armorblox risk assessment below.